Virginia Mountain Bike Trail - it is THE adventure!

In the fall of 2011 Cyclists pioneered The Virginia Mountain Bike Trail, an off-road connector route spanning the length of Virginia's Allegheny & Blue Ridge Mountain Ranges. These riders returned to the commonwealth's early american frontier, in search of recreational resources. Their purpose was to connect public lands in Virginia's mountainous border region. The group embarked on a mission with the intent to establish a permanent long distance backcountry trail that rivals the infamous Arizona or Colorado trails. What they discovered was a world class back-country expedition; as they linked 8 major trail systems in the George Washington and Jefferson National Forests. Their route, consisting of primarily single track trails, covered 480 miles and climbed 65,000 feet over the course of 12 days. Beginning just west of Strasburg, the explorers began their journey on the County Line Trail. They rolled southward along rocky ridge lines, challenging climbs and fast descents and after two full weeks, the riders finished their final descent down the Iron Mountain Trail to Damascus.

Its been years of research, riding, rinse and repeat.... getting the vision complete. A decade of exploring and preparing the best sections of trail to link together. Thanks to the great motivation from IMBA's Dan Hudson and Rich Edwards we kept pushing forward with the idea.

Darrell "Dirty D" Prillamen invited us down in 2009 for the Trans Iron that ends in Damascus. He had it dialed in with his henchmen from Boone, NC. The Trans Iron starts on the New River Trail before heading up into the mountains on the Highlands Horse Trail. After a long day on the HHT it shares the Iron Mountain Trail for a bit before it takes the full pull of the Iron Mountain Trail concluding the final sector of the Virginia Mountain Bike trail ending in Damacus. It is good! His boys Drew, YT, J Grimes, and Kelly T. have this hooked up!

We got Jeremiah Bishop, Andy Johnston and Cory Rimmer out on a few days bike packing on the northernmost section in 2010. We had such a great time, we knew we had to roll the full monty in 2011.

In the summer of 2011 Chris Scott made the last few reconnaissance trips south of Covington. We finally had enough beta to give it a try. After loading up the Shenandoah Mountain Touring gear, Dan Oates took the helm as captain support for the first half and Tyler Spurlock taking the reigns for the second half. A great group of folks joined in for sections of the ride including, Jason Mattis, Kurt Rosenberger, Mike Boyes, Jennifer Wolfson, Nate Shearer, Misty Tilson, Jake Brown, Lucas Brown, Scott Dwyer, Kirby Walke, Graham Snyder, Katy Smith, and Sam Lindblom.

The vision of the Virginia Mountain Bike Trail, complete with a hut to hut system running it's full length, accessible by singletack riders, dirt road explorers and those touring the paved roads will take some time and dedicated volunteers. After doing the entire route the vision is so clear it seems like it could be completed overnight. If you are interested in lending a hand, get in touch and email us!

Small sections have huge dedicated heros already. Mike Capraro and Susan Musante have been keeping open County Line Trail, Mill Mountain Trail, Long Mountain Trail, and most of the Lee Districts North Mountain Trail for the past few years (along with many other great trails on the Lee District) Huge efforts have been done on the Carr Mountain Trail (another gallery HERE) by SVBC, SMT, PATC and the Back Country Horseman, and we still have a long way to go for the trail to be finished to USFS specifications. We (SMT) have been keeping open Shenandoah Mountain Trail. The Shenandoah Valley Bicycle Coalition has kept the momentum moving by fostering the Recreational Trails Grant recieved from Virginia's Department of Conservation and Recreation. This grant funded the restoration of Chestnut Ridge from Little Bald Knob.
As of the inaugural ride, Fore Mountain Trail into Covington needs a heck of a lot of work to be free from huge blow downs, the brush needs to be cut back and some tread needs to be rehabilitated from being used while it has been in bad shape. Broad Run and Patterson Mountain Trails north of New Castle are in dire need of clearing too.

We started small with super cool backcountry loops like Stokesville Douthat Stokesville. The experience we have gained from this has been carried forward. We know given the expanse of the terrain and the challenge to access the remote trails, maintenance of the route seems to be an insurmountable task. It took us five of the eight years riding SDS to get "some" control of the 150 mile route. A surprise can always be expected on some portion of the route. An example would be the massive gypsy moth devastation on Little Mare Mountain Trail leaving the trail with towering tinker toys that fall in every gust and underbrush bursting towards they sky and choking out the trail and then itself. This leaves a decade long task clearing the trail as the canopy rebuilds. The USFS is so shackled by budget cuts they can do little more then encourage and support our passion. Now we are trying to take a leading roll in maintaining this 480 mile route. Sign your club up to be involved in your Virginia Mountain Bike Trail! It needs your help to be a reality! 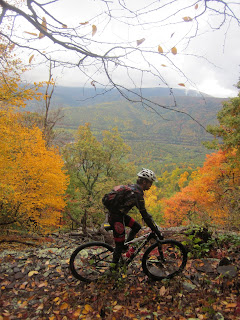 Promote Your Page Too

Shenandoah Mountain Touring LLC
Promoting fun cycling events and bicycle tours in the Shenandoah Valley and beyond since 1999.